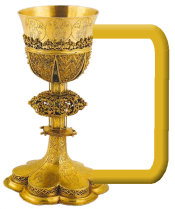 God and I had sat down for a drink after a long time.

“Seriously you gonna drink beer in a Holy Grail?” I asked him with one of my eyebrows raised.

“Yeah man, it’s kinda cool! He said proudly and added, “I hope that doesn’t hurt your sentiments. Besides it can take in lot more of beer than your mug does. Ha ha!

“Hmm” I said. I always knew he was cheating somehow.

“So, tell me son, how is going out there?” He asked hurriedly since he always liked talking serious stuff when he was sober.

“It’s all good. Some anti-muslim movie made in US and some killing over the same. Some deaths in China and then maybe there will be some sparks between Israel and Iran over nuclear program…

But why are you asking me? Don’t you follow updates on your twitter?” I said taking a pause.

“Uh, there are just too many of them. I get bored so I unfollowed most of them” he started to laugh. He he!

“Not good, besides I’m sure you are still stalking Megan fox on her profile. I know you did not unfollow her.
Did you?” I said joining the laughter.

“Yeah I do admit. She is hot. But C’mon she’s my creation after all.” He said boastfully.

“Yeah yeah, let’s not talk about creation of life. I know you did not do it. It’s all science. It always has been.” I replied and replenishing my beer mug as well trying to catch up with his pace.

“Alright, if that makes you happy,” he sarcastically answered.

“And you tell me what’s new in your life?” God further asked filling up the Holy Grail for the 3rd time already.

“I’m dating someone now” I said looking down with my nervous fingers holding the hands of mug.

“No, that’s nothing new. I mean is this someone new?”

“Thanks again for the being witty. Yes, someone new. And I got to know her through a common friend.”

“Oh, nice. How is it going on then?” He sounded genuinely curious this time as he kept the beer grail on the table.

I took a pause before saying, “it’s going on well. So far so good. I’m really hopeful about this one. You know I tend to screw up every time.”

“Thanks!” I replied with a smile.

“But hold on, what you mean you’ll pray for me? And to whom?”

“I don’t know. That’s what you humans say right?” He asked innocently.

“Ha ha, you are right that we do. And more importantly it is usually addressed to you.”

“Really?” He raised one of his eyebrows now.

“That would be a major fuck up then. I mean 4000 years of fuck up ha ha!” He exclaimed and we both laughed.

We raised the mugs for the toast for the second time that day.

“And I hope that you have started believing in me finally.”

“Not really.” I gave a calm reply.

“It is just a dream. We both know that. Soon I’m gonna wake up in bed and get back to life.

“Get up honey” you gotta go to office.

“Umm…” I opened my eyes to her smiling face and a throbbing headache.

“Hmm…let me guess, it wasn’t really after hours work then yesterday. I’m sure you had a guys night and lot of beer with them. Didn’t you?”

“No I did not” was all I could say, scratching my head.