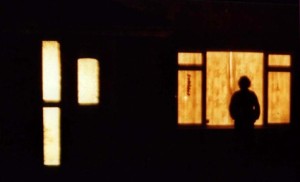 It must have stopped raining an hour back or so. But the night was still draped in the sweet scent of monsoon. It was a cold November night and it was making her lean more into his arms.

Looking up and kissing his chin, she closed her eyes once again. A big window of her bedroom was their favourite place. A window big enough for both of them to sit comfortably. He liked the view it gave from her 9th floor and she loved to cuddle with him sitting there.

“You still smell of beer” she said hoping to break his cloud of thoughts.

“Hmm” he uttered while observing the building as tall as the one they were in. The only difference being the building looked rather old. ‘They must have built it long back’ he thought.

Realising it had been some time he replied to her question, he looked down and kissed her forehead before she reached out to kiss his lips.

“You smell of it too” he laughed.

“What are you thinking?” She asked her routine question and he had his reply ready.

“I’m just looking at those houses. Do you see them? Few windows that are lit up, while the rest have fallen asleep. So many houses. So many stories.”

She looked into the direction he was looking.

“What business people might have at this hour? It is almost 2 am.”

“Check that window on the extreme right, the one with red light. Weird stuff. Who puts a red light inside their bedroom?” He exclaimed.

“It’s kind of scary. Don’t make me think about it.” She shuddered.

“And what about that window…” he held onto his thought as he said that, staring at a house roughly 2-3 floors down from theirs.

“The one below…down there. Oh wait, I see someone behind that glass.
That guy is naked. What the f…”

“Oh my god. He is. Or maybe he is wearing a skin coloured shirt. Umm…no you’re right. He is naked.”

“Hahaha…this is like that episode from Friends, when they keep seeing the ugly naked guy staying opposite to their building.”

“But…” He tilted his head as he said that and continued “but what in the world is he doing sitting up straight like that? He is not even moving.”
He looked at the scene inside that glass window. A big thick glass window. The moonlight was glistening onto the glass’s edges occasionally.

“Do you think he can see us?” She held his hand and asked him like a five year old kid.

“I do not know. Maybe.” He was thinking the same when she asked him.

“He is looking over here only, I think” she was starting to get scared a bit.

“You’re right. Even we are awake as he is. Maybe he is thinking about us like we are.”

“Umm…screw him. Let’s go to bed. I think we are wasting the happy high feeling of beer.” He said and moved his hands over her neckline.

“Okay. Not so fast mister” she said while her eyes were still glued onto the window of Ugly naked guy.

“I know, I can’t help it” he laughed and continued his effort to unbutton her top.

“He turned around to spot the window and it was followed by something that shook their senses.

Ugly naked guy held a gun to his head.

Before she could complete her sentence, the naked guy shot himself and a fountain of blood pierced out from backside of his head onto the wall behind. He fell dramatically slowly onto the bed.

“OH GOD” she screamed and he tried to comfort her and himself from what had just happened.

“Let me think” he was a bit irritated with her bombardment of questions.

After few seconds of going through an array of thoughts inside his head, he finally made a decision.

“I am going downstairs. There must be a security guard for that building. I think I might go with him and check.”

“Are you sure?” she asked him as if that would change his mind.

“I’ll be back. You can come along if you want to.”

“I do” she said and they rushed out of her flat in the dark hours of that midnight.

The elevator made an eerie sound while moving downstairs. Tonight it sounded more horrible than any other day somehow.

Both were lost for words. She looked at him and he gently put his arm around her. It did not make her feel any better, a thought she kept to herself.

“I want to go upstairs. I saw…I saw a man shoot himself. Over there” He did his best explaining to a half asleep night watchman.

“What! Where? I did not hear anything” watchman rubbed his eyes and looked anything but convinced.

But they led him upstairs. To the flat they approximately calculated to be on 7th floor.

They reached outside the house where they had witnessed the ugly naked guy kill himself.

She once again remembered the blood dripping down the wall and his impassive face. Cold dead face. She was not sure if she was strong enough to see a dead man. A dead naked man.

The watchman rang the bell and it was not met with any response.

He looked behind at both of them suggesting they had simply wasted his time.

He then rang the bell again.

Three of them looked at eyehole going dark and sensed the door knob being moved from inside.

The door was opened and a man in his late forties seemed rather irritated at being woken up at midnight.

“Sorry to disturb you Mr Kanth. But these two claimed they saw a man shooting himself. And they’re saying they saw it happen at your house.”

“Yes. The bedroom. The room facing the B wing building” he said as she tried to look inside the house.

“What bullshit! Nothing like that happened. What is this?” the man scolded the watchman.

But to their surprise, the watchman pleaded Mr Kanth to let them have a look inside once. He had his own reasons to do that. The reasons he had kept to himself throughout ten years of his service.

Mr Kanth finally agreed and the three of them entered the house. She followed him closely as she could sense there was something wrong.

Mr Kanth switched on the light and they saw it was nothing more than a perfectly normal house. He felt the grip of her hand going tighter as they moved towards the room, where they had seen what Mr Kanth had out-rightly refused.

Mr Kanth opened the room and she chose not to enter it. She let him though. Him on the hand, he was determined to find out what had really happened. He was scared too. But he was determined. He felt the air getting thicker as he got inside.

On the bed, there was a kid sleeping with both his feet wrapped in a cloth and put onto a cushion.

“He had met with an accident. He lost them” Mr Kanth said watching him stare at kid’s feet.

“Sorry. We are sorry to have troubled you” said watchman on their behalf and the three left the house.

On their way back to her flat, he had no answers to her questions. Any of them really.

“You think we had spotted some other flat maybe?”

“No. It was the same one.” He replied and pressed 19th on the elevator’s screen.

Elevator again made its screeching sound as it took them back to her house.

“I don’t know what we saw. And whether Mr Kanth did something to hide.  Let’s try not to think about it as of now” he said and selfishly continued to delve into the same thoughts.

She did not say anything. She just wanted him to stay with her. She wanted to sleep in his arms. But she knew he wouldn’t stay back. He never did. And yet she hoped tonight he might will. For her.

“I am sleeping here tonight” he said to her delight and continued to speak,

“I have not parked my car inside. Let me do that. I’ll just be back.”

“Come back soon. I am still scared.”

“I know. I will” he said and rushed outside.

He knew what he had to do. He almost ran towards the building to spot the same watchman sitting there, staring at Mr Kanth’s bedroom window.

“You do know. There is something. I am not drunk. And I swear I saw a man shoot himself. I cannot be wrong. It was the same room.”

“I have no time for this sir” the watchman said as if he expected him to show up again.

“You almost argued with Mr Kanth at 2 am in the night. You did not need to. Something did convince you to do that.”

“Hmm…” letting out a big sigh, the watchman finally looked at him.

“Sir, it was what you said. What you said you had seen. The way you said you had seen it happen.
It was…it was something I had seen with my own eyes. After it had happened. At the same house we went to. It was about five years back. Mr Kanth did not reside in that flat back then. I remember hearing a gunshot and rushing to that house. That man was lying flat on his back. On the bed where we saw the little kid sleep so peacefully tonight. That man. And the expression on his face. I cannot forget that. There was a gun. There was blood. Oh so much blood. And the chaos that followed for days after that. Police. Detectives.  But you go now. Forget that you saw anything, if you did. Go home. I don’t have any answers.”

He let the watchman drown into his thoughts as he tried to make sense of what must have happened. Five years back? Oh the night, the midnight was getting freakier with every passing minute. Suddenly he was shaken by a sound of his phone ringing.

He felt guilty of having left her alone in the house. She must be scared. He swiped his thumb across the cell phone screen to answer the phone.

For first few seconds he could only hear her breathe.

“Hello! You there?” he asked as he moved towards the elevator.

“Hello…she finally managed to speak. Where…where are you?” he could sense her crying as she spoke.

“I am coming upstairs. What happened?”

“That glass window. That same window…please come to me right now. Please!”

“What happened? I’m almost there. You saw something again?” he imagined multiple scenarios in his head.

“Yes. That kid. That same kid in Mr Kanth’s house. He was sitting there in the window” she said and started crying again.

“What are you saying?”

“Ya..I saw that kid. He looked younger than he did when we saw him. He was sitting there and Mr Kanth…

“Mr Kanth…he opened the window and pushed him down. He pushed the kid down…”

4 thoughts on “The ugly naked guy”