Sauviragram,
Along the banks of Godavari,
17th century…somewhere near Paithan. 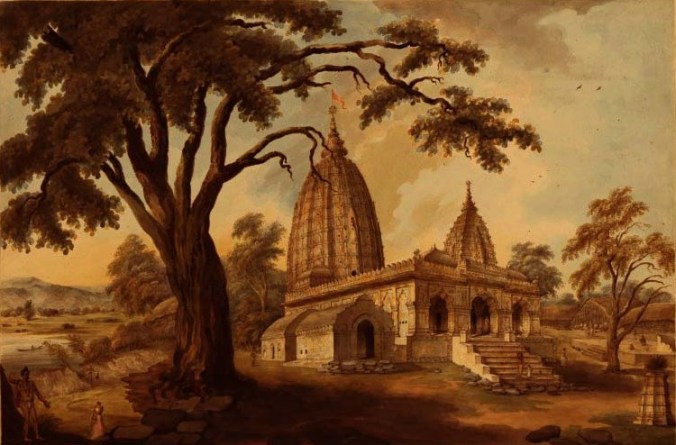 “FASTER! Don’t waste time. And don’t pick up that spoiled cotton” Naamdev was giving instructions to women of his family picking cotton from the plants. It was a harvest season and traders from Paithan would be coming in just few weeks of time.

“If we could collect good amount of cotton in time, we can barter enough gold and goods for it” he thought to himself.

“Where is Ilaa?” Naamdev shouted as his daughter was nowhere to be seen.

None of the women deviated from their work, as they knew Ilaa would be whiling her time away somewhere, thinking of an ideal world she wants to be in.

An ideal world was still a dream. But for now, she had to settle for a peaceful place like ‘baherche nath’ (God Eknath outside the temple). It was a small passage along the banks of river Godavari which was famous for housing the tomb of Saint Eknath. It was also the end point of Paithan city connecting to Sauviragram village. Paithan housed the temple called ‘aatle nath’ (God inside the temple) which previously used to be the residence of Saint Eknath.

“I am sick of this! Why do we have to work in the fields when Arun and Ganesh get to learn about Vedas and Shastra from Dharamguru in the temple?” Ilaa grunted loudly.

Iravati and Padma simply looked at each other. It was a routine. Ila’s frustration at what men could do and what women weren’t allowed to.

“Let that be. You two! Now start reciting what I taught you the last time.” Ilaa ordered in the same tone as town’s Dharamguru used to speak.

“Umm…namo aadimaya bhagwati…umm” Iravati fumbled her words as she bit her lower lip trying to recall rest of the lines.

“Ohho…this is not even half of what I had taught you” Ilaa was clearly not impressed.

“Ilaa, can I ask something? Do you know how to write?” Padma spoke finally while double checking, if someone was around to catch them not working.

Ilaa was taken aback. But keeping her composure, she nodded ‘no’.

“I have heard in Paithan’s temple, where Saint Eknath used to stay, they teach women to write. And since you visit the temple with your grandfather regularly, I thought you might be…”

“Oh I wish!” Ilaa exclaimed. She knew it was not their fault not being able to remember the poems. But reciting to each other was the only way they could keep it in their memory…unless they learn to write, like Ilaa.

She had kept it a secret. She had been asked to, by her grandfather who had taught her to write. He was her secret mentor. He must have been more than 80 year old. One of the most elderly and respected ones in town. He hardly walked. Apart from his pilgrimage to Paithan every year, he was known to keep himself inside the house.

And while at the house, he spent his time telling stories to his grandkids – Ilaa and her younger brother, Arun. He would tell them about the history of Paithan and that of nearby towns. Paithan which was a capital of Saatvahan kings was later called as ‘Southern Kashi’ of our country, he told them. Arun was too young and maybe a bit immature to see, but Ilaa could notice her grandfather’s eyes were filled with tears when he said he had always wished to visit Kashi.

Amongst all the stories she heard from her grandfather, Saint Eknath’s tales were her favourite. ‘About his literature, his social work and his fight for equal rights to everyone’; she was mesmerized by his work. One evening before sleeping, the grandfather narrated them the story of “Bayaa daar ughad” (Oh goddess, open the gates). It was a poem written by Eknath addressed to Goddess Jagdamba. It was during the time when Vijaynagar Empire was on the verge of extinction. Social structure was shattered. Women once treated as equals were being sold and bargained in the daylight in Southern Kashi of Bharat-India. Saint Eknath then wrote this poem, demanding status of women to be restored to what once used to be during Vedic times. His poem inspired people and once again they stood together. Saint Eknath shone them the light needed to push the darkness of cruelty that had engulfed the town.

“So do you mean, women could also sit at temples and learn about Vedas like men do in our village?”

Grandfather decided to answer that question only once he was sure that Arun and his son, Naamdev had fallen asleep.
Ilaa was sitting outside the house, gazing at the star studded sky. The moonlight crawled along the edges of rooftops. He sat next to her and took a deep breath. It wasn’t the first time that she had asked him such a question.

He placed the lantern next to her and started scribbling on the floor. That night, Ilaa learnt to write her first few letters. And then few more the next night. The pace increased as she showed her acumen to her willing grandfather. Slowly she learnt to write the entire poem.

Today when Padma asked Ilaa ‘whether she could write’, it sparked a thought inside her mind. She could see the eagerness to learn in Padma’s eyes. She wanted to help her. And Iravati. And all other women of her village to write, to read, to be able to do the things that only men were allowed to do. She remembered how Dharamguru at temple had reacted, when during Eknath festival last year, she expressed her desire to learn alongside the men of the village. The crowd laughed and one head – that of Naamdev’s, stooped low in embarrassment, his eyes emitting fire. But she decided not to give up. She really wanted to learn.

That night Ilaa was sitting outside the house again, with the lantern keeping her warm.

Her grandfather’s coughing was the only sound in the asleep Sauviragram.

“You have gone crazy” he said as soon as he sat next to her.

“The plan is to teach our village in the language that they understand. Only then they will be ready to teach us”. Ilaa then explained the entire plan to him, with him nodding, asking her to reconsider, nodding again and finally saying yes. ‘You will have to wake up very early from tomorrow’ he reminded her. And determined Ilaa happily agreed.

The next morning Sauviragram witnessed a miracle.

The entire town was shocked. Apart from Dharamguru and Grandfather of Ilaa no one could recite and write the poem in the small town. It was not Dharamguru and the old man could barely walk.

It was followed by one new line the next morning. The village people considered it as Saint Eknath himself scribbling it down, with Eknath birth anniversary being just around the corner.

Dharamguru was astonished, as he studied the letters on the wall next to Eknath’s , with the crowd behind him waiting for an answer to the miracle they had witnessed for the first time. He had not seen anything like this. He had not taught anyone. Grandfather of Ilaa had not left his house in past decade or two. Dharamguru took a minute or two and shook his head. He then turned to face the crowd.

“Saint has spoken! Our forefathers have called this tomb as ‘baherche nath’ (God outside the temple) and he wants us to follow his instructions” Dharamguru raised his hand as he spoke and the crowd folded hands in respect.

Dharamguru read the line written that day. It asked the village to collect sunflowers and place them at the feet of Eknath’s idol in the temple. They did so.

The next morning new line appeared on the wall saying ‘Nath (God) was unhappy with the village having abandoned his teachings’. Everyone looked at each other with puzzled faces. Trying his best to look confident of what was written; Dharamguru said, they should wait for next instructions to appear.

There was a week left for traders from Paithan and nearby towns to arrive. A week left for the village to celebrate the birth anniversary of Eknath. And this time the festival was to be held at even larger scale than before, for the God himself had walked along the banks of Godavari again.

That morning Ilaa stood next to Padma and Iravati along with their town men and women. All of them were looking at Dharamguru, who stood firm with his back facing them. Dharamguru’s face was bathing in sweat, his hands were trembling.

“Bayaa daar ughad…(Oh Goddess open the gates)” he murmured the words as they appeared on the wall in front.

He finally turned and managed to speak – “Nath (God) has instructed. For us to be fortunate in trade for cotton, for our families to stay safe and blessed by him. He has asked us…he has demanded us to open the gates of the temple again. For women. For us to treat them the way we treat men. For the respect they deserve”.

There was a pin drop silence. The sound of Godavari’s water splashing the banks of village and thoughts of surprise, awe, and respect in everyone’s head played simultaneously.

Looking at the mute crowd, Dharmguru finally raised his finger pointing towards sky.

“Prepare to open the doors to our mothers and sisters on the auspicious day of Eknath festival”.

The crowd cheered in response. A faint smile spread across the Goddess’s face. She had once again shown the light to her people caught in the midst of darkness.